Germany, Breastfeeding and Attachment Disorders between Mother and Child 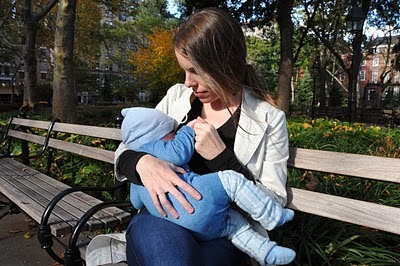 Germany presented its consolidated 3rd and 4th periodic report on the situation of the implementation of the Convention on the Rights of the Child (CRC) in the country.

IBFAN presented an alternative report and an annex to inform the CRC Committee on Germany’s situation on the issue of infant and young child feeding.

General overview of breastfeeding in German

The alternative report insists on the lack of up-to-date information concerning breastfeeding practices. Indeed, there is only one national  survey with data on breastfeeding practices and this data go back to 2005, assessing that initiation of breastfeeding was of 81.5% and that children were exclusively breastfed during a mean duration of 4 to 6 months, while WHO recommends exclusive breastfeeding to 6 months. The report highlights that in the most vulnerable social classes, breastfeeding is less practiced. Another discrepancy in practices has also been found between the different Länder. Regarding the implementation of the International Code, Germany has adopted the EU Directive 2006/141/EC on infant formulae and follow-on formulae, which is weaker than the Code. However, even this legislation is neither monitored nor enforced. The marketing of breastmilk substitutes is aggressive and “gifts”, among other things, are provided to patients by doctors and nurses. Hipp provides, for example, a special programme that gives the attendants credits for their obligatory continued education. In addition, Germany faces another issue related to conflicts of interest: some scientists are paid by baby food industry to carry out studies on breastfeeding. As demonstrated in the literature, such business interests may seriously affect the results of these studies and thus influence the reliability of the data and ultimately lead to distortion of policy decisions. Finally, only 78 out of about 800 hospitals complied with the requirements of the WHO/UNICEF Baby-friendly Hospital Initiative (BFHI). Furthermore, due to economic pressure on hospitals to work profitably and more workload for less staff, baby-friendly hospitals face difficulties to keep up their standards. The national health insurance does not consider their services as a quality standard and therefore, does not get any extra payment and support.

The CRC Committee asked if Germany implemented the International Code. The issue of maternity protection rules, especially maternity leave, has also been discussed, as well as the  existence of any potential barriers to breastfeeding in public. The Committee then raised its concern about the increasing rate of attachment disorders between the mothers and their children in Germany, stressing the importance of breastfeeding to build attachment in the early stage of life. The German delegation did not address in their response any of these issues.

A wide range of other topics related to the rights of the child were tackled during the session: the impact of the business sector on children’s rights, children with disabilities, children from ethnical and social minorities, birth registration, corporal punishment, help lines for children, juvenile justice, education, harmful practices on children, children in institutions and baby-boxes.

In its Concluding Observations, the CRC Committee recommended Germany to establish a comprehensive data collection system (para 16), to respect children’s rights in relation to the business sector (para 23), to raise awareness about healthy eating habits (para 57) and to promote breastfeeding while informing the public on the risks of formula feeding (para 63).

In the first instance, the CRC Committee requested the State Party to “establish a comprehensive and integrated data collection system on children covering all Länder and the entire period of childhood up to the age of 18, and to introduce indicators on children’s rights on which progress in the realization of those rights could be analysed and assessed.

Further, the Committee recalled its 2013 General Comment N° 16 on State obligations regarding the impact of the business sector on children’s rights, that specifically calls on States “to implement and enforce internationally agreed standards concerning children’s rights, health and business including the [...] International Code of Marketing of Breast-milk Substitutes and relevant subsequent World Health Assembly resolutions”. In the section Children's right and the business sector, the Committee recommended Germany to “(a) Establish a clear regulatory framework for the industries operating in the State party to ensure that their activities do not negatively affect human rights or endanger environmental and other standards, especially those relating to children’s rights; (b) Take into consideration the best interests of the child when adopting budgetary measures such as subsidies for business affecting children rights; (c) Examine and adapt its legislative framework (civil, criminal and administrative) to ensure the legal accountability of business enterprises and their subsidiaries operating in or managed from the State party’s territory, regarding violations of child and human rights.”

The CRC 2013 General Comment N°15 on the right of the child to the enjoyment of the highest attainable standard of health (art. 24) explicitly recognises the importance of breastfeeding for the achievement of the right of the child to health. It urges States, in the effort of diminishing infant and child mortality, to devote particular attention to neonatal mortality and suggests, inter alia, to “pay particular attention to ensuring full protection and promotion of breastfeeding practices”. Moreover, “exclusive breastfeeding for infants up to 6 months should be protected and promoted and breastfeeding should continue together with appropriate complementary foods preferably until two years of age as feasible. States’ obligations in this area are defined in the “protect, promote and support framework”, adopted unanimously by the World Health Assembly in its 2002 Global Strategy for Infant and Young Child Feeding". Regarding Health and health services, Germany is urged to pay attention to the General Comment N° 15 and to “undertake advocacy and awareness-raising programmes targeting schools and families, emphasizing the importance of physical exercise, healthy eating habits and lifestyles, as well as take all necessary efforts to address the existing disparities in health outcomes. Special attention should be paid to children and young people in vulnerable situations, especially those from socially disadvantaged or migration backgrounds”. The Committee furthermore recommended the State Party to “take every necessary legislative and structural measure to ensure that every child within the State party has access to breastfeeding through the control of infant formula which will promote better bonding between infants and mother."

Last but not least, as the Committee noted with concern that breastfeeding rates were declining in Germany, it recommended the government to “strengthen its efforts to promote exclusive and continued breastfeeding by providing access to materials, and educating and raising awareness of the public on the importance of breastfeeding and the risks of formula feeding. The Committee urges the State party to strictly enforce the International Code of Marketing of Breast-milk Substitutes.”
Pubblicato da Unknown a 15:10