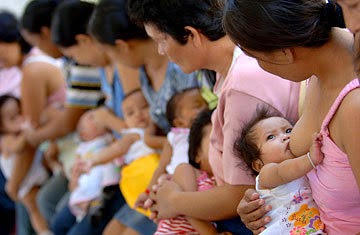 In view of the session, IBFAN presented an alternative report on the situation of infant and young child feeding in China, prepared by IBFAN East-Asia.

The report shows that in China, breastfeeding declined rapidly during the 1980s due to the promotion of breastmilk substitutes and inappropriate medical practices. With the implementation of the Baby-Friendly Hospital Initiative since 1992 and the national regulation on the marketing of breastmilk substitutes (China’s Regulation) entered in force in 1995, breastfeeding’s superiority has been recognized and mothers are encouraged and supported to breastfeed their infants. However, breastfeeding promotion in community and work place has not yet received enough attention. One of the challenges regards the popularity of formula feeding and persistence of inadequate feeding practices such as giving water to infants under 5 months. Another challenge is the ban the marketing promotion of infant formula which undermines mothers’ confidence on successful breastfeeding. It is difficult for health authorities to supervise, conduct training and reassessments of the baby-friendly health facilities in China given the great number of concerned facilities (over 60,000). Finally, it is hard to ensure mothers’ entitlement to paid maternal leave and breastfeeding facilities, especially considering the rapid evolution of lifestyle in China.

No specific questions were raised on the infant and young child feeding.

Nonetheless, the experts raised questions about the separation of mothers and children in the Hong Kong Special Administrative Region, affecting thousands of children, as there was no legislation that ensured the right of a mother to live with her children. In addition, the experts also raised the issue of pre-natal sex selection because of boy preference, as well as forced abortion, even in the third trimester. The adoption of Chinese babies by overseas parents has also been addressed as a problematic issue; indeed, mostly 100 per cent of these adopted babies were girls.

In relation with maternity protection, we note that the delegation of China has stated that some 46 % of the working population is made of women.

In its Concluding Observations, the Committee recommends China to establish a clear regulatory framework for companies and to adopt appropriate legislative and administrative measures to ensure legal liability of companies (para 13). Moreover, the Committee recommends that the State take measures to eliminate multiple-discrimination faced by rural women in particular in access to health (para 16).  After expressing its concern about the situation of food security in some of the poor areas, the Committee urges the State to strengthen its efforts to protect the right to adequate food.  Indeed, the State should intensify its efforts in order to address effectively the situation of food insecurity and child malnutrition in poor rural areas.  The enforcement of the Food Safety Law is desirable to strengthen its efforts on food safety supervision and to ensure the production, processing, distribution, marketing and consumption of safe food (para 29).

In addition, the Committee recommends China to undertake all necessary measures to improve its health care and services to guarantee the enjoyment of the right to good quality and affordable health care to all persons in China.  On the same note, a recommendation is also made to increase the budgetary allocations to the health sector and to strengthen training for health care professionals (para 33).

Besides, the Committee emphasizes the importance of awareness-raising activities aimed at promoting understanding of the modes of transmission of HIV among the population (para 34).

Finally, the Committee urges the State party, Hong Kong, China and Macao, China to build a systematic data collection (para 61) and encourages the State party to engage all relevant actors including NGOs in the process of discussion on the implementation of the present concluding observations at national level (para 65).