Morocco at the CRC: Important Decline of the Exclusive Breastfeeding Rate 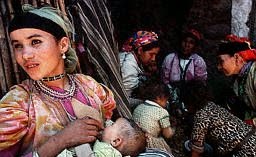 General overview of breastfeeding in Morocco

The report highlighted the decline of exclusive breastfeeding of 23.3% between 1992 and 2011 (51% in 1992 and 27.8% in 2011). In 2005, the Ministry of Health has even declared that the decline of breastfeeding constitutes a concern of public health. An overall lack of knowledge about optimal breastfeeding practices has also been pointed out; indeed, more than 2 infants out of 3 are not breastfed within one hour after delivery, while the rate of predominant breastfeeding under 6 months of age is higher (45.5%) than the rate of exclusive breastfeeding, notwithstanding that predominant breastfeeding has been associated with an increased risk of diarrhoea. The addition of sugar in infants’ meals has also been highlighted as problematic. Finally, regional disparities have addressed: in rural areas, mothers are more likely to breastfeed, while in urban areas, breastfeeding rates are lower and bottle-feeding is more common.

In Morocco, only few provisions of the International Code on the Marketing of Breastmilk Substitutes have been implemented into law, despite the prohibition of the distribution of free baby food samples since 1992. Furthermore, some 43% of the hospitals and maternities of the country are certified as “baby-friendly” (43 out of 112). In addition, the report reflected the concern raised by the initiative “Rising to the Challenge” (convened by WHO, UNICEF and UNFPA in collaboration with other partners) about the lack of commitment of medical and paramedical institutions in raising awareness of the health professionals on the public health approaches and on the Ministry of Health primary health care guidelines in a sustainable manner and with a good standard of quality.

Finally, the report pointed out some others concerns related to infant and young children feeding: the absence of maternity leave for women working in the informal sector, the lack of knowledge on different ways of mother-to-child transmission of HIV as well as the lack of information on the current status of the 2008 pilot programme “Prevention of mother-to-child transmission of HIV”, and the absence of information on any emergency preparedness plan to ensure integrated response to protect and support breastfeeding in case of emergencies.

The Committee expressed concerns about the fact that only 43 hospitals out of 112 are certified as "baby-friendly" as well as about the fast decrease of the exclusive breastfeeding rate in the country. The Committee emphasized the emotional attachment between mothers and their child thrived through nursing and asked what are the measures set up by the government in order to support young mothers to breastfeed. In addition, the Committee highlighted the fact that in Morocco, only few provisions of the Code have been implemented into national legislation.

The Moroccan Delegation first stated that there are persisting differences between rural and urban areas in terms of access to reproductive health services. The government has therefore developed an action plan to improve health care provision in remote areas through hospitals and mobile health care services. The aim is to reach the ratio of 95% of skilled attendant present at birth. In terms of reproductive health, the government has implemented a national strategy and a booklet on this issue has been published in collaboration with the WHO. Regarding breastfeeding, the Delegation indicated that the 2011-2019 national strategy on nutrition focuses among other things on strengthening the nutrition of infants. In addition, the Delegation mentioned the existence of the national plan to encourage breastfeeding. It further stated that a bill aimed at encouraging breastfeeding has been prepared in the framework of the 2012-2016 national plan of action for child health.

The Committee further asked what is done against companies that advertise their products in hospitals and if there is a national law implementing the Code and protecting breastfeeding against aggressive marketing of breastmilk substitutes.

The Delegation answered that breastfeeding is promoted within health facilities throughout the country.

In its Concluding Observations, the Committee made several indirect recommendations. With regard to the general measures of implementation, it urged Morocco “to take all necessary measures to address those recommendations that have not been implemented or not sufficiently implemented and, in particular, those related to data collection” (§7). It also asked Morocco to “ensure that the Integrated Policy on Children encompasses child protection and covers all areas under the Convention and all children” (§13).

Additionally, the Committee draws Morocco’s attention to “its general comment No. 16 (2013) on State obligations regarding the impact of the business sector on children’s rights and especially recommends that the State party examine and adapt its legislative framework concerning legal accountability of business enterprises and their subsidiaries operating in or managed from the State party´s territory” (§23(a)).

With regard to health issues, the Committee recommended that Morocco “ensure that sufficient resources are allocated for the health sector and effectively used, and develop and implement comprehensive policies and programmes for improving the health situation of children and facilitating a greater and equal access to quality primary health services by mothers and children in all areas of the country”. It also called the Government to “take more effective measures to address maternal and infant mortality and the nutritional status of young children” (§55 (a)(b)).

However, the Committee did not issued any direct recommendation related to breastfeeding.